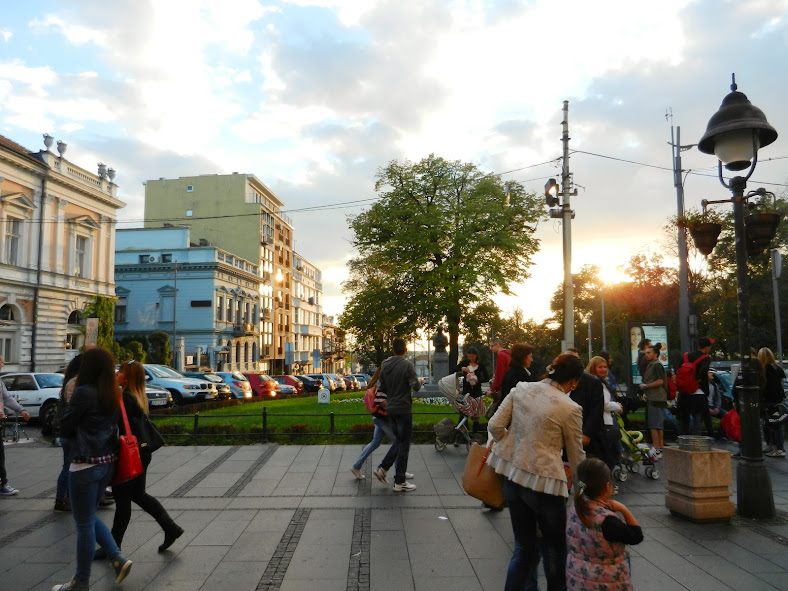 Ashleigh and I stepped off the bus into Belgrade’s streets around five in the morning, expecting the city to be asleep. Instead, we were met with a heavy bass thumping from thriving nightclubs, scattered people swaggering with half-drunk bottles in their hands, and a completely smashed sailor who just wouldn’t leave us alone (in a friendly sort of way). Most of Belgrade was still awake from the night before and still rearing to party!

We passed the time throughout the morning waiting to meet with a “couchsurfer” host, but that arrangement eventually fell through due to a communication issue (her not responding to most of our messages). If you haven’t heard of it before, Couchsurfing.com is an organization of people all over the world who are willing to let you stay in their home for a couple of days- for free! We’d been kicking ourselves into giving it a try, and so when we finally acquired a couch only to lose it, we were left a bit discouraged. Sadly dismissing our first couchsurfing experience, we checked into a cheap hostel on the outskirts of the city centre. Though it looked a bit sketchy from the outside, the Fortress Hostel turned out to be a wonderful place for us to stay and the owner was extremely friendly. Alls well that ends well I say, though we will try Couchsurfing again in the future and see how it goes.

Our days in Belgrade were sunny, bright– filled with many interesting historical sites, monumental Orthodox Churches and long walks alongside the Danube River. At night, the steady vibrations of the nightclub’s dance music pounded us to sleep.

Belgrade Fortress is the top tourist attraction in Belgrade and one of our first visits. This impressive stronghold, overlooking the confluence of the Sava and Danube rivers, has been destroyed and rebuilt by many different empires over almost two millennia. Of course the Romans had constructed a fort there first (bloody Romans, leaving remnants of their civilization under every lump of soil), aware of its strategic importance, by the name of Singidunum. On top of their walls stand Serbian ramparts and on top of them, Turkish and further Austrian fortifications. In the present, the lovely Kalemegdan Park lies within Fort Belgrade’s walls, along with many museums, a zoo, an observatory, and while we were there, some dinosaurs!

Overlooking the Danube from Belgrade Fortress

St. Mark’s Church was a typical, Serbian Orthodox Church we happened to stumble upon while strolling through Tašmajdan park, sampling from the many popcorn vendors that magically appear whenever the sun comes out. It was a massive and almost intimidating structure, built in a unique Serbian-Byzantium style that I found quite beautiful in its own way. Inside, St. Mark’s church seemed even larger. Hundreds of icons of the Saints decorated the walls and a giant, candle-lit chandelier hung in the centre of the church like a glittering, golden crown.  With its mighty, red marble pillars and the high, domed ceilings, St. Mark’s church reminded me very much of the mosques we saw while visiting Turkey.

Skadarlija was a cool little car-free zone known as the Bohemian quarter of Belgrade– a collection of artsy cafes and taverns on a cobblestone promenade that was once the meeting place of great Serbian artists, actors, writers, and poets. The restaurants are proud of their guest lists of worldwide celebrities, such as Alfred Hitchcock, Jimi Hendrix, and George H. W. Bush, who have visited over the decades. A statue of Đura Jakšić, one of the most beloved poets of the Serbs and a symbol of their national spirit (also the most talented Serbian painter of the 19th century) sits in front of the house where he used to live. We enjoyed a cup of coffee and a stroll around this area, marvelling at the murals, decorated cafe fronts and its general charm.

, or the Millennium Tower, was our final mission in Belgrade before moving on. We decided to take an hour and a half walk along the Danube to the Millennium Tower, designed by Hungarian architects in 1896 to commemorate 1000 years of Hungarian rule in central Europe. This structure was part of an enormous construction project of four towers built at the four corners of the Hungarian Empire. Beneath Gardoš Tower are the ruins of an ancient Roman fortress (again, bloody Romans!), named Tarunum, whose walls are still visible today. The old tower has been recently renovated and it is now possible to climb to the top for an admission of a mere $2.30. From there we enjoyed excellent views of the surrounding town of Gardoš, the Danube and Belgrade under the backdrop of a gorgeous sunset.

Having had our fill of Belgrade after three days we began to look northwards to where we’d be re-entering the Schengen area at the Hungarian border. One smaller city on the way caught our eye and, finding a cheap airbnb, we decided to hang out in this charming town for a couple of days. Serbia was just not ready to let us go! 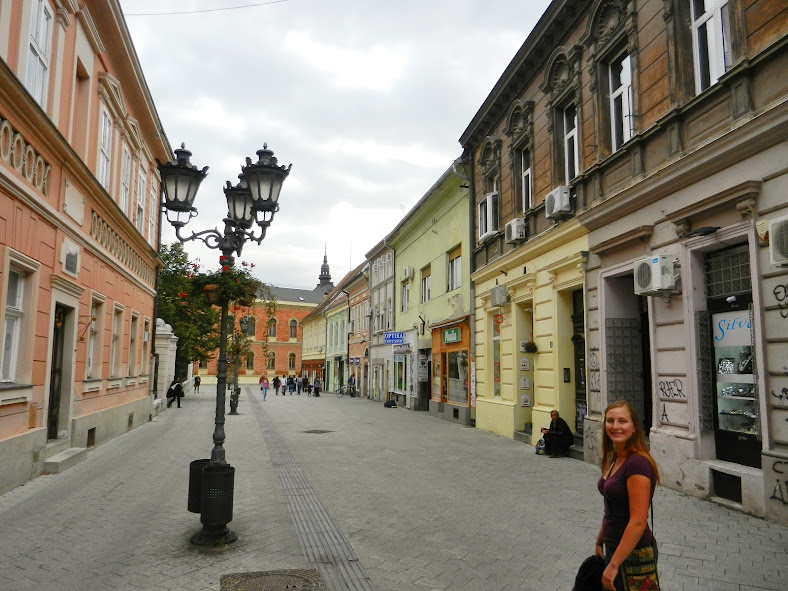 Novi Sad was a surprisingly elegant city with tranquil parks, a mighty hilltop fortress, and brightly coloured baroque-style buildings. For our last stop in Serbia, maybe forever, we were not disappointed!

Evidence found at the site of Petrovariden Fortress, overlooking Novi Sad and the Danube, proves that a fort has existed on top of the hill since at least 3000 B.C. The history of Petrovariden was formed over the ages by Celts, Romans, Byzantines, Hungarians, Austrians and Turks (oh, and Serbians of course), but I won’t dare bore you with too many details. The massive fortifications standing today are partially from a monastery built by Hungarians in 1247 but mostly from the renovations and extensions added by the Austrians to prepare for Turkish invasion. It was here at Petrovariden Fortress that a decisive battle was bravely and epically fought between the Austrians and the Turks in 1716. Though the Turks vastly outnumbered them, the Austrians successfully repelled the siege, thus signalling an end to the Turkish threat in central Europe. Have I bored you yet?

The EXIT festival is what puts Petrovariden and Novi Sad on the map. This annual, summer music festival has been held within the fortress since 2001 and has hosted big names like Robert Plant, Billy Idol, Sex Pistols, Beastie Boys, Guns N’ Roses, and the Wu-Tang Clan. The Exit was officially proclaimed as the ‘Best Major European festival’ at the EU Festival Awards, and during its existence it has been visited by over two million people from more than 60 countries. What started as a student protest fighting for democracy and freedom in the Balkans has exploded in popularity, becoming world renowned.

Serbia surprised me, alongside most of the other eastern European countries, with its incredible beauty, both natural and architectural, and with its festivals, traditions and activities that keep a country moving forward. Though their past may be sometimes grey, the Serbians strive to better themselves and their country, always looking to the future and opening their horizons. Ashleigh and I left behind this “mysterious, former eastern bloc” with a better idea of the marvels hidden there, and can highly recommend any traveller to visit and discover these places on their own. I mean, c’mon, you can’t beat $1.50 for a pint of beer! 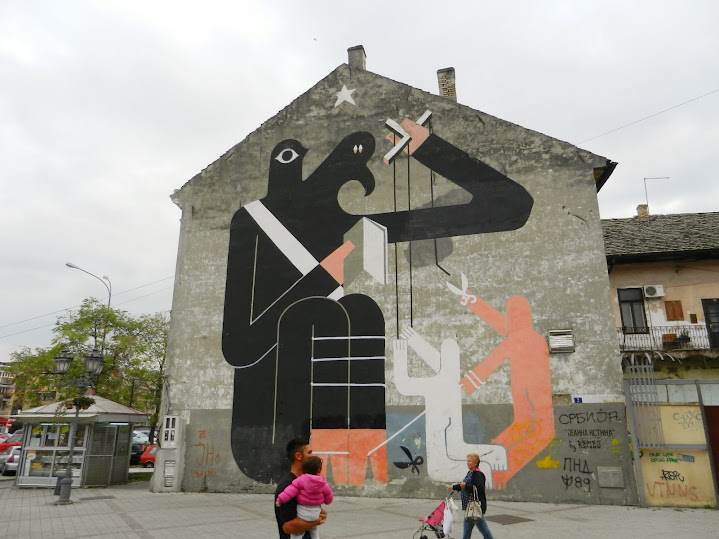