The ruin of Rosslyn Castle

Rosslyn Chapel, made more well known by Dan Brown’s popular book “The Da Vinci Code”, is a Catholic chapel, built by the Sinclair family, filled and covered with intricate carvings created to tell stories to the unlearned and illiterate. As marvellous and interesting as that is, many people tend to overlook the ruins of Rosslyn Castle, just a few hundred metres down the road from the chapel, overlooking the North Esk River. The castle is now merely a shadow of what it was, but its ruins are still impressive. Part of the castle has been renovated into a holiday accommodation that can justly be described as unique. Upon arriving at its entrance I was especially blown away by the enormous stone arch bridge leading into the grounds. 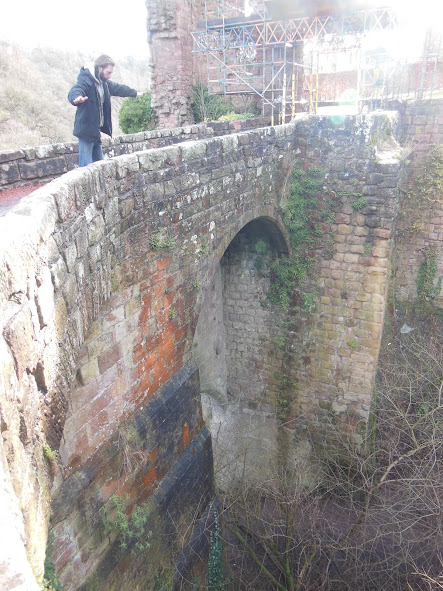 The Bridge to Rosslyn.

The Sinclair family has owned the area of Rosslyn since 1280 and have yet to give it up, the castle and chapel still held under the name of Peter Sinclair, the seventh earl of Rosslyn. Way back in 1304 the first Rosslyn castle was built when the Sinclair family sought to strengthen their hold on their estates in the area. In 1452 there was an accidental fire and the castle was severely damaged, but eventually repaired. Again, Rosslyn caught fire in 1544, though this time because of a mean old Earl of Hertford who had his army bombard the castle during the “War of the Rough Wooing” (a war declared by Henry VIII of England, in an attempt to force the Scots to agree to a marriage between his son Edward and the infant Mary, Queen of Scots). In the late 16th century the Sinclair family managed to rebuild their precious fortress as well as adding a new five story east range built into the side of the rock face. In 1650 Rosslyn Castle suffered for the last time under the iron hand of Oliver Cromwell’s, “Old Ironsides”, invasion of Scotland, his artillery leaving the fortress in ruins, which is all you can pretty much find today.

The remains of the original “Wall Tower”.

Rosslyn Castle was once at a highly defensible location until the invention of longer range artillery. It is perched high on a promontory of rock, hidden in a wooded valley overlooking the beautiful River North Esk, just 8 miles from Edinburgh. It is surrounded on three sides by the river, and is only accessible by a narrow bridge crossing a 55-foot chasm! This high bridge was once wider and probably incorporated a drawbridge between two vertical piers. Beyond are the remains of the great gatehouse to the left and right of the entrance. Immediately to the left is the high stonework of the original ‘Wall Tower’, the earliest part of the castle built directly onto the lower scarped rock.  A French-influenced two-storey house (now used as a holiday accommodation for rich tourists) to the left of the courtyard was built by a William Sinclair (not the same William who built Rosslyn Chapel) when he extended much of the castle in the late 16th century. His intials ‘WS’ with the shield bearing the Sinclair cross are still visible above the window on the first floor.

The stories claim, that within the vaults under the courtyard of Rosslyn Castle, there is a horde of treasure worth several millions of pounds. It is under the protection of a sleeping lady of the ancient house of Sinclair, who will only awaken by the sound of a trumpet, which must be sounded in one of the lower apartments. She will make her appearance and point out the spot where the treasure lies. If she could but be awakened, and point to the buried treasure, then Rosslyn Castle might rise once more from its ruins, and become the majestic pile that it once was.

A holiday home in Rosslyn Castle.