Our final stop in Scotland was at the ultra-famous Loch Ness. Interested in the idea of spotting the Loch Ness monster, we decided to spend the night camping along its shores. We found a lovely, not-so-legit camping spot with a pebble beach, grassy knolls, possibly some grazing sheep, and immediately next to us were the ruins of Urquhart Castle. Despite being surrounded by Japanese tourists, Urquhart is a picturesque beauty resting on an outcrop of land, called “Strone Point”, jutting out into the loch. The castle, though in a bit of a ruined state, is a massive tourist attraction– second to “Nessieland”.

Locked in a deadly battle with wittle Nessie…

Although the present ruin of Urquhart Castle was built in 13th century, the site of Urquhart was once occupied by a fortress named “Airdchartdan” as early as the 5th century. It was recorded in the history books that an Irish missionary, Saint Columba, visited the town of Inverness in Loch Ness between 562 and 586 AD. During the same visit, Columba stayed at Airdchartdan and converted a Pictish nobleman named Emchath, whom we can assume was the lord of the fortress at that time. Emchath was on his deathbed and the promise of eternal paradise after death sounded like a good option. Emchath’s son, Virolec, and his whole family converted to Christianity as well, just to be encouraging.

The present day castle of Urquhart was first founded in the 13th century by Alan Duward, the Hostarius (protector of the King’s property) of King Alexander II, to maintain order within the “Great Glen”. In 1296, King Edward I, or Edward ‘Longshanks’, captured Urquhart castle– kicking off the Scottish Wars of Independence. Edward Longshanks appointed Sir William FitzWarin as constable to hold the castle for the English, but he failed miserably when in 1298 the Scots attacked and reclaimed Urquhart. Be that as it may, this being a very turbulent time for castle possession in the history of the United Kingdom, Urquhart was retaken under the command of Edward I in 1303. Finally, in 1307, Robert the Bruce marched through the Great Glen and captured the castles of Inverlochy, Urquhart, and Inverness, all of which remained in Scottish hands from then on. After this time Urquhart became a royal castle, held for the crown by a series of constables, but the fun was still not over. A new enemy arose, the Lords of the Isles, the MacDonald clan, who consistently raided the Great Glen and Urquhart castle in the late 1300’s and subsequently over the next 200 years. Though some attacks were successful, the MacDonalds were never able to hold Urquhart for long. 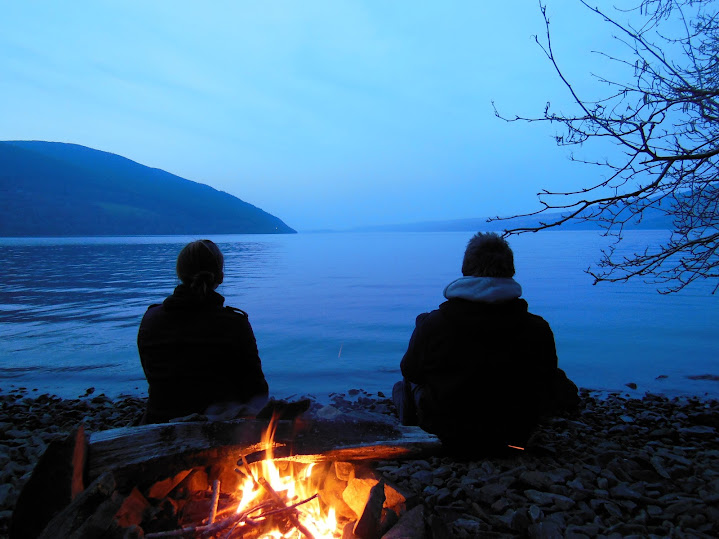 Camping on the shores of the loch.

Urquhart castle is situated on the north-west side of the Loch Ness, commanding the route along that side of the Great Glen. The castle is quite close to water level, though there are low cliffs along the north-east sides, and a dry moat protects the fortress from and inland approach. The walled portion of the castle is shaped roughly like a figure-8 forming two baileys (enclosures): the Nether Bailey to the north, and the Upper Bailey to the south. The Nether Bailey is protected by a gatehouse containing two towers flanking an arched entrance passage complete with a portcullis. The Nether Bailey has been the focus of activity on the castle since around 1400 and contains the main castle keep as well as a range of other buildings (the Great Hall, private chambers and kitchens). The Upper Bailey was placed on the mound where the earlier fortress of Airdchartdan once stood. A 16th-century water gate in the eastern wall of the Upper Bailey gives access to the shore of the loch and adjacent buildings may have housed the stables, smithy, and a pigeon house.

Though Urquhart castle is a venue on the Loch Ness worth visiting, it is overshadowed by a popular and far more renowned tourist attraction located deep within the loch. A “Cryptid”, from the Greek word kryptomeaning “to hide”, is a creature whose existence has been suggested but not yet discovered or proven by the scientific community. Among the most famous of these are the Yeti in the Himalayas, the Sasquatch in North America, the Chupacabra in Latin America, and the Loch Ness monster in Scotland. The story of the Loch Ness monster has been around for a long time, one account dating back to year 565. Saint Columba, the Irish missionary who visited the fortress Airdchartdan at the site of the later Urquhart castle, came across the local Picts burying a man by the River Ness. They explained that the man had been swimming across the river when a terrible water monster rose up from the depths and attacked him. The locals tried to save the man but by the time they pulled him out of the river he had already been mauled to death by the creature. Hearing this, Saint Columba leapt at the chance to impress the pagan Picts with his magic Christian powers. Columba sent one of his followers, Luigne moccu Min, to swim across the river. The evil creature rose up from the depths yet again to attack a human trespasser, but Saint Columba made the sign of the cross and commanded, “Go no further. Do not touch the man. Go back at once.” The beast immediately halted as if it had been pulled back with ropes and fled to the pits of Hell from whence it came. The pagans, realizing that being Christian gives you supernatural powers, immediately converted and gave praise to God. Ever since that time and up to now there have been sightings of the Loch Ness Monster, often described much like the ancient plesiosaur– a creature with flippers, a 6-9 metre-long body, a long neck and a small head.