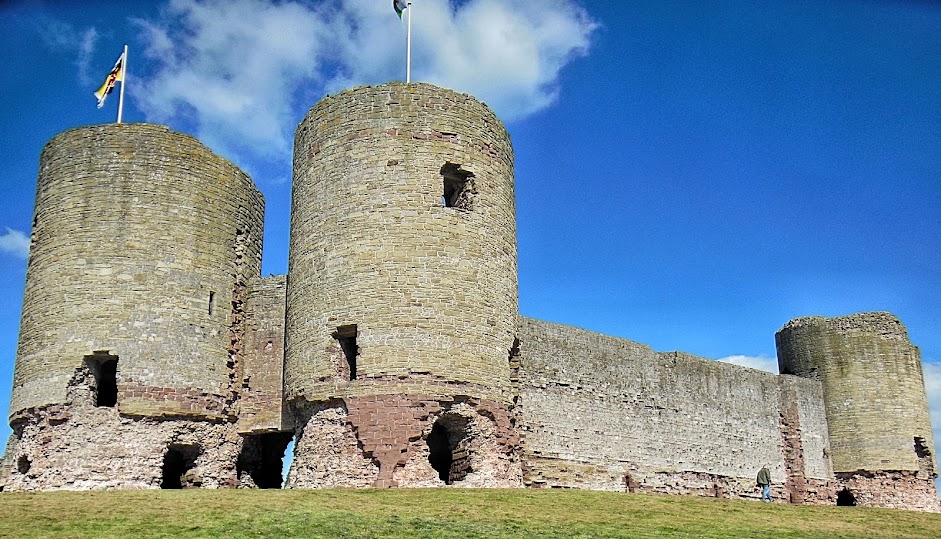 When we first laid eyes on Rhuddlan castle, one of the last few stops we squeezed into our tour, we immediately asked ourselves, “Did a bomb go off here?” A great, gaping hole yawned in one of its bulwarks, half a tower was missing, and many stones looked as if they were ripped from the walls. ‘Swiss cheese’ could accurately describe Rhuddlan’s defenses. Steel spiral staircases and platforms were added so that tourists could walk partially on to the battlements because there was nothing else to step on. Compared to our previous castles in Conwy and Caernafon, Rhuddlan was merely a skeleton of the past in a derelict state. Though ruined, Rhuddlan castle wasn’t any less interesting, and it was certainly beautiful sight to behold– in its own way.

Many years before the Edwardian castle and the Norman occupation, Rhuddlan was the heart of the country. From here all the Lords of Rhuddlan ruled over North West Wales. In the late 11th century, the Normans invaded after conquering England. The remains of a Norman castle at Twthill, built in 1086, is just to the south of the current Rhuddlan castle. It was July, 1277 when King Edward I left Chester, England with a force of men, launching his invasion of Northern Wales. Flint and Rhuddlan castle were the first of his “Iron Ring”: a chain of fortresses designed to encircle North Wales and dominate the Welsh. The construction of Flint castle began immediately, followed by Rhuddlan castle three months later. In five years the castle was completed, and in 1284 the Statute of Rhuddlan was signed at the castle, surrendering all the lands of the former Welsh Princes to the English Crown and introducing English common law. Rhuddlan castle successfully defended itself through two Welsh uprisings (though the town was badly damaged) but after the English Civil war the Parliament ordered for Rhuddlan to be slighted, partially demolished to prevent further military use. It is because of this slighting that Rhuddlan castle lies in such a ruined state, and one can only reminisce of its former glory.

Rhuddlan castle is simple but has a unique diamond design with the two gatehouses positioned at the corners rather than along the sides. An inner ward was protected by those gatehouses and towers, whereas the outer ward was defended by a smaller wall and towers, part of which still exists near the river Clwyd. During construction the river course was straightened and dredged to allow ships to sail inland along a man-made channel. Its purpose was to allow provisions and troops to reach the castle even if hostile forces prevented overland travel.

There is an old story that takes place at the site of Rhuddlan when the Welsh lords were still in power. Long ago, the beautiful daughter of the King of North Wales, Erilda, was betrothed to the Prince of South Wales, a marriage intended to create peace between the two ancient nations. One day, while following the royal hunt, Princess Erilda became lost deep in the woods. Just as it was getting dark and she was starting to despair, a figure rode out from the shadows on a huge steed, clad in black armour. He lifted her into his horse and carried her back to her father’s castle at Rhuddlan. The anxious king was overjoyed when the black warrior, with blood-red plume upon his helmet, rode into the courtyard with his rescued daughter. All was not well, however, for the black knight was truly an evil spirit, determined to sabotage the peace between north and south Wales. The knight cast a spell upon the princess, and she found herself unable to resist when he suggested that she elope with him. As they made their way towards the nearby river, the knight reverted to his true form. The princess recoiled in horror at the monstrous demon to which she was about to plight her troth. Seizing Erilda in its scaly arms, the evil creature dragged the princess screaming into the river Clwyd, disappearing below the water’s surface forever. It is said that to this day Rhuddlan castle is haunted by her blood curdling screams and the demon’s laughter.