We had been staying a few weeks on a farm near Yalova, just a short ferry ride away from Istanbul. Chevrel and Alan are an English couple building their dream property on the mountainside of the small village of Kurtköy, and we definitely took away a lot of inspiration from their place. My favourite moments though were during tea time with everyone out in the garden. Between everyone laughing, chickens darting in to steal grapes, and the dogs nudging around to say hi, we would all be having a blast over cups of tea. Bidding everyone a fond farewell, we set off on our next adventure… Istanbul! 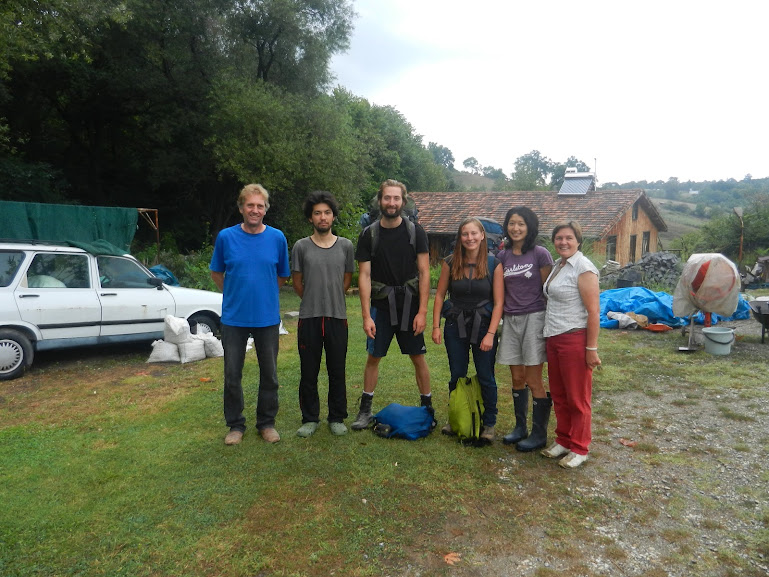 Taking a ferry over from Yalova to Istanbul was beautiful, especially sailing by the Prince’s Islands that we had visited a week or so before. We’ve finally arrived in the city I’ve been waiting all month to see, Istanbul! A city of lights and legend, full of heart and history, a city that never sleeps! We found a place through Airbnb that was within walking distance to the city centre, but was still out of the way from most of the action. Even so,  it was hard to get a good nights sleep because there was so much going on all the time! Oh well, the energy of Istanbul is infectious and there was so much that we wanted to see anyway that we were still eager to go out each morning. 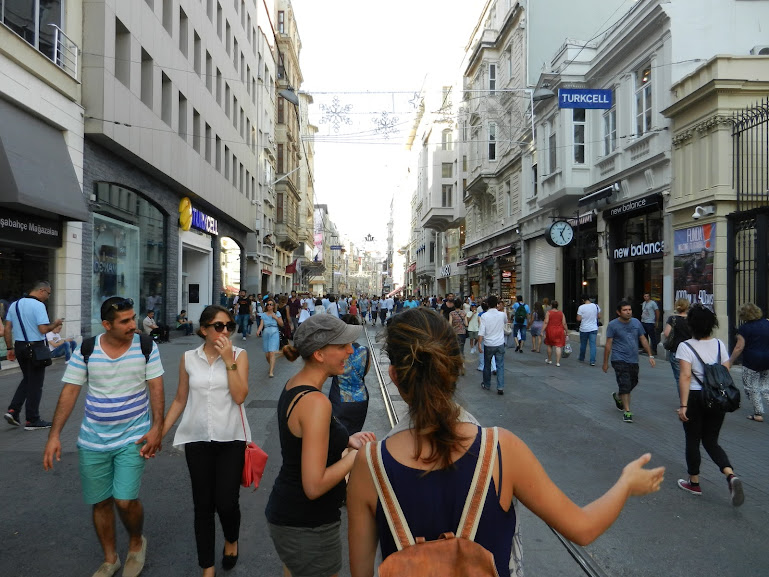 Istanbul has been the capital of not one, not two, but four different empires over its history. Initially, it was founded as the Greek city Byzantium around 660 BC. It was re-established and renamed Constantinople when it was named capital of the Roman Empire in 324 AD by Constantine the Great. Constantinople remained capital of the Byzantine Empire for over a thousand years, with the exception of a brief stint as part of the Latin Empire founded by members of the Fourth Crusade. The influence of the Byzantine Empire rose and fell over the centuries, and eventually the fall of Constantinople to the Ottoman’s ended the empire for good. The Ottoman Empire was powerful and hugely influential over the centuries, eventually branching out to include portions of the Balkans, northern Africa, and the Middle East. The empire finally collapsed in the aftermath of World War I. The Republic of Turkey emerged and though Constantinople, now Istanbul, was no longer the capital, it still is a major cultural and economic centre in modern Turkey.

There’s so much to see in Istanbul, it’s hard to know where to start! Our first night we did a bit of exploring on our own, wandering over to Galata Tower and looking at the lights of the city from the metro bridge. The next day, the real sight-seeing would begin 😉

There were three “must-see” spots on our list, Hagia Sophia, the Blue Mosque, and Topkapı Palace. We decided to check out Hagia Sophia first, and it was definitely one of the highlights of our time in Istanbul. Hagia Sophia was the largest church constructed in the Byzantine Empire, and in fact has been built and rebuilt three time on the current site. In typical historical style, the first church had a wooden roof that was burnt down after a public riot in 404. The second church also had a wooden roof, but escaped fire long enough to be demolished in 532 after another public riot. The third church was more or less the Hagia Sophia we see today, albeit with modifications. But that’s not the end of Hagia Sophia’s story. When the Ottoman Empire took over Constantinople they renovated the church into a mosque, continuing its purpose as a place of worship. In 1935, after nearly five centuries of calling Muslims to prayer, Hagia Sophia was converted to the museum it is today. 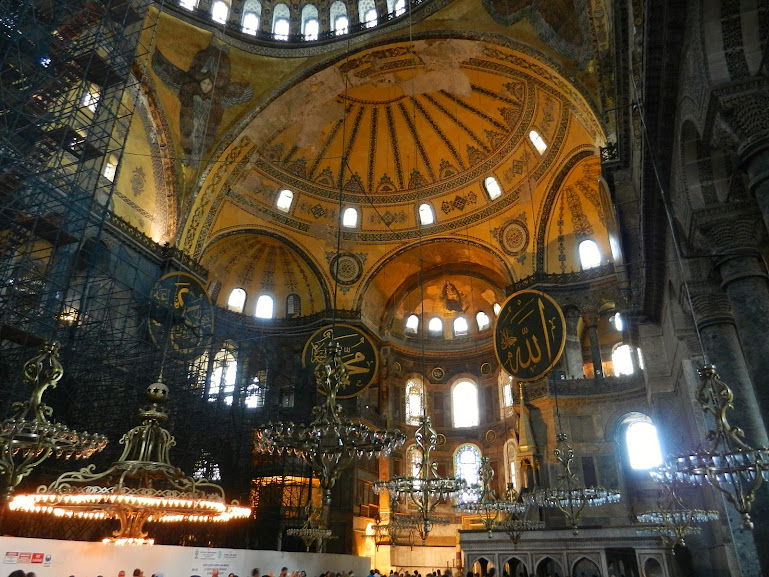 What I liked most about Hagia Sophia was seeing this amazing blend of religions and cultures. When the church was converted to a mosque, the Christian mosaics and iconography were either removed or plastered over, with the exception of the image of the Virgin Mary and child. With recent restoration work, you can now see some of the incredible Christian mosaics alongside medallions bearing beautiful, calligraphic inscriptions of the names of Allah. Visitors from all over the world have visited over the centuries, some leaving behind a little bit of themselves for people to wonder at. While I HATE people who feel the need to carve their names into historical places, I had to admit it was kind of funny/cool to find Nordic runes left behind by a Viking mercenary in the 9th century.

Next up on the grand tour, the Blue Mosque! Really named the Sultan Ahmed Mosque, it got its nickname from the blue tiles that decorate the interior. As it’s still an active place of worship, tourists can only enter at certain times of the day and must stay outside during prayer times. There’s this really amazing sense of community surrounding the mosques we visited. People are mingling inside and out; praying, talking, reading, and washing while children are playing in the background. Before you head in, they have plenty of sheets and hair scarves available for tourists that don’t have their own, and after taking off your shoes you’re free to enter. While all the mosques we had visited were unique and beautiful in their own right, this was my favourite without question. The ceiling and walls are covered in ornate, blue tiles with hundreds of different patterns. The stained glass windows were just as ornate and the predominantly blue patterns looked magical alongside the tiles.

Our final “must-see” stop was Topkapı Palace! While the price of this place made it iffy as to whether or not it was worthwhile visiting, in the end I’m glad we did. It was absolutely packed with people, but once we managed to fight our way through the hordes of tourists we got to see some pretty cool stuff. My favourite parts of the palace were the harem and the back section of the grounds, an area filled with ornate tiles, sculptures, and some lovely gardens. A lot of people probably skip the harem due to the second admission fee, but I thought the tiles and stain glass windows were incredible. Depends on what you enjoy seeing… But I really fell in love with the ceramics in Turkey.

Besides the top three that everyone visits, we spent a lot of time wandering around the markets and the back-streets. Everyone who had already been to the markets, and everyone on the internet, kept warning us about pickpockets, aggressive sellers, and all that stuff so I was so nervous by the time we actually went. But honestly, I loved it! There was so much to see, and while the sellers were more aggressive than we were used to, I don’t think it bothered us too much since we weren’t really looking to buy anything anyways. The Grand Bazaar has everything you could imagine buying all in one place, but I thought the Egyptian Spice Market was well worth a visit too. The trays were piled high with brightly coloured and fragrant spices, and there were rows and rows of drawers full of teas.

Our last day we spent with Beril, a friend we had made back in Kabakum (whose Mom made incredible Şiş kebab!). It was so nice to see a familiar face, and over lunch just outside Galata Tower we told her all about our adventures trekking up the coast. After wandering up to Taksim Square and enjoying a few pieces of the best baklava I’ve ever had, we had to say a sad farewell as Nat and I raced to catch our evening bus to Bulgaria. Not to worry though, I’m sure we’ll be visiting again soon 🙂