Two pairs of huge, gooey eyes stared up at me expectantly as I sat on the porch of Little Spring’s Guesthouse, tying up my bootlaces. Even though it was half an hour before their usual walking time, Mečka and Sausage took it upon themselves to wake us up during the early hours with a series of high and low barks accompanied by incessant whining. Wiping the sleep from my eyes and fending off the two energetic dogs, hopping around like giant rabbits, I stumbled down the walkway and opened the gate. Mečka and Sausage took off like a shot with the older (and wiser) black lab, Chester, trailing slowly behind.

I was grumpy as usual in the morning, but that soon faded away as I strode up the nearby mountainside, along the stony pathway through the trees and out into the open field. Up there on a bluff, overlooking the tiny village of Malak Izvor, the air was fresh, the sun was shining and everything at peace. Mečka (meaning “bear”) charged towards me but stopped abruptly when I turned to look at her, bowing her head in shame. My heart was overwhelmed with pity and I crouched down to give her a pat. Both dogs immediately leapt towards me, tails twirling like helicopters, seeking as much affection as they could squeeze out of my body. Meanwhile, 300 yards away, Chester plodded along the mountain trail, his jowls swinging back and forth, patiently following our scent.

Our time staying and volunteering for our host Max was fantastic. Max owned a guesthouse within a lovely village set on the hillside of the Balkan Range, about an hours drive from Sofia, Bulgaria’s capital city. We were lucky enough to be visiting in the low season so we were able to have the guesthouse all to ourselves. Max had a beautiful home just across from us built on stone foundations, surrounded by grapevines, a bountiful garden, with the mountains in his backyard. Along with minor repair work, renovations and gardening, Ashleigh and I enjoyed taking Max’s delightful, canine companions out on a hike every morning and evening into the great outdoors.

The view up in the mountains was incredible and we enjoyed discovering new trails into serene meadows and up to rocky summits. One fantastic hike we took for five hours along a mountain range was to a mysterious monastery nestled between two peaks. We had a little adventure when I enthusiastically decided we should climb an extra peak just to get a nice, overhead picture of the monastery. Because the detour added an extra hour to our expedition, I was hasty in my decision to take an extremely steep downhill slope as a short-cut to the monastery. As I lowered my hiking pack carefully down a short drop onto the slope, the ground underneath slipped away and my bag barrelled downhill at top speed. Panicking, I leapt after my runaway bag only to find that the stones and earth ran beneath me like a raging river. Half skateboarding like a pro and half sliding on my ass, I finally caught up to my hiking bag 100 metres down. Needless to say, I still think the picture I took was worth dirty jeans and my water bottle exploding all over my gear!

In the late 14th century monks from the nearby village of Glozhene built Glozhene Monastery on top of a high rock in order to protect it from the raids of the Ottomans. The legend says that a special icon of St. George the Victorious kept disappearing from the original monastery in Glozhene and reappearing on the hill nearby, which the villagers took as a holy sign. The new monastery, devoted to St. George, was built on top of the hill, as directed by God, and remains there to this day. I would also like to say that the monks devoted to St. George the Dragonslayer were trained by his example to go out into the world and battle evil monsters, but this would be a fabrication of my own.

Looking out from Glozhene Monastery

St. George and the Dragon silver plate
Glozhene was a small but fascinating monastery to explore, with extremely high walls set upon a precipice (the Ottomans would have had a hard time with that) and a group of ancient, wooden buildings surrounding an inner courtyard. On entering we were greeted by a wild-eyed man with a black bush of hair, beard, and eyebrows wearing a long, dark robe. This wild man, apparently, is the last monk still living in the monastery, making a living through donations to the church and his various priesthood rituals (also living off the food provided by his lovely garden). He is also likely to be the last dragon-slayer of the order of St. George, but that could be just my imagination. We followed the mysterious monk into the inner chapel, which was full of many colourful frescoes and depictions of St.George thrusting his spear down a feeble serpent’s throat. Afterwards we found perfect camping spot back up the trail and settled in to spend the night.

Anyone who knows me well will know that I love caves. I can’t really explain why – maybe I just love being in tight spaces and the feeling of a thousand tons of rock over my head? There are many secret and a few well-known caves throughout Bulgaria, and one particular day our host Max, despite coming down with a cold, decided to take us to the cathedral of caves: Saeva Dupka. An easy, 15 minute drive from Malak Izvor, I would say Saeva Dupka is my favourite of all the caves I’ve explored. “Explored” may be a less accurate term than “led,” as it was a guided tour, but because he was speaking in Bulgarian I could easily ignore him and enjoy the marvellous cavern of twisting, limestone columns and hanging, stalactite daggers.

Evidence tells us that people have lived in Saeva Dupka since Roman times and we could see why. There are five, huge main halls in the cave giving plenty of space to build huts or other living quarters. Being quite deep underground, Saeva Dupka remains between 7-11 degrees Celcius all year round- a perfect escape from the winter cold or any wild storms. The name “Saeva” supposedly comes from the names of two brothers, Seyu and Sae, who hid inside the cave during the Ottoman occupation of Bulgaria, choosing to live in the wild rather than being under Ottoman rule. One of the caverns in Saeva Dupka, the “Concert Hall” is very musical; it has excellent acoustics and many famous choirs have sung there over the years. When hit with a stick, several of the stalactites make clear notes much like a xylophone. You can imagine that long ago, when the ancient people were bored and waiting down in their cave for summer to come, they would have passed the time through much song, dance, and xylophone music!

Sharp Stalactites
One final adventure around Malak Izvor was with Max’s friend Alexa and her daughter from Scotland. They were going on a market trip to the nearby town of Teteven, a village set within a steep valley along a river, and we happily went along for the ride (half an hour from home base). After perusing through the local market selling everything from cheese and vegetables to antique furniture and broken cellphones, we all decided to find a nearby trail and go on a little hike. While maneuvering slowly upward on a slippery trail along a trickling creek, a wizened old man quickly overtook us and passed by, waving hello. He must have been at least 60 but was far more used to hiking than we were. After a few moments the old man returned and gestured for us to follow him.

Sooner or later we came to his home, a tiny house on top of a hill with an orchard, garden and even a turbine which turned the nearby creek into electricity for his house! It seemed he lived up there all alone with no road access for a vehicle, though he did have a horse. This friendly man took us inside, pulled up a few stools for us to sit on around his table, and withdrew a bottle of home-brewed Rakia from his cupboard. We communicated as best we could, though none of us knew much Bulgarian, and had a great time sipping Rakia in this stranger’s house. Now that’s Bulgarian hospitality! 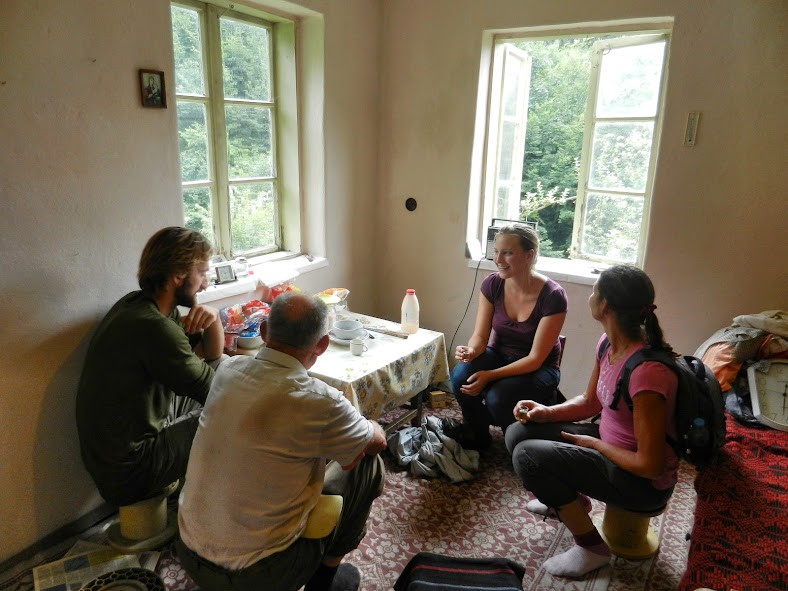 After what was probably an hour we thanked the stranger for showing us his beautiful home and giving us a few shots of nice home brewed liquor, then made our way back down the trail, giggling to ourselves and trying not to fall over. As much as we would like to have thought this was a special occurrence, I am sure that any tourist walking on the Teteven trail will be accosted by this mysterious old man and brought home to drink Rakia… so, to his future visitors, I say nazdrave!

Without even leaving the region we have had so much fun hiking, spelunking, and meeting fascinating people! Soon it will be time to step out of the comfort of our little village, Malak Izvor, and further into the obscure lands of Bulgaria!