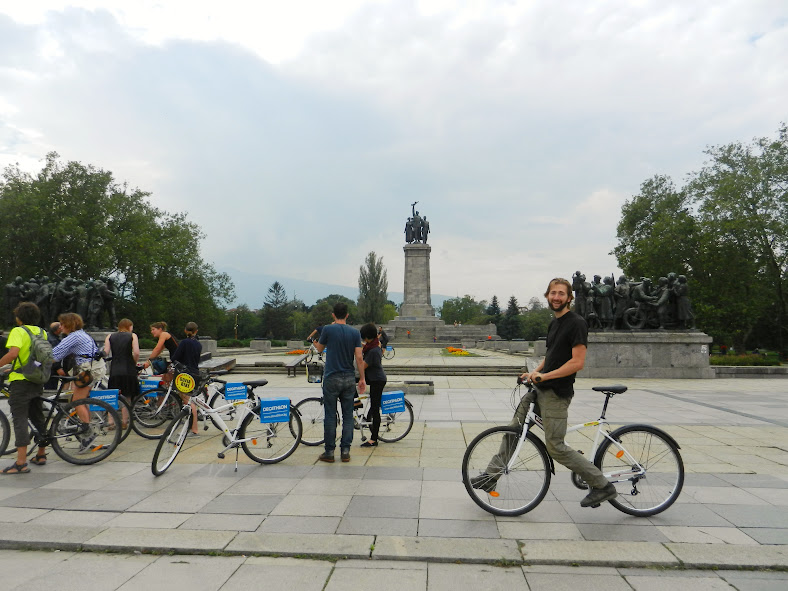 All roads in Bulgaria lead to Sofia, the capital city, so we were bound to cross paths eventually. As it turned out a friend of ours, whom we met in Makvarket, Denmark, was passing through Bulgaria on her travels and so we timed our visit to Sofia to meet up with her. Kat had just finished exploring Istanbul with her companion, Elena,  and we were excited to swap stories as well as discover a new place together.

Usually when I get to a new place I enjoy exploring on my own (which means getting lost most of the time), but with the amount of free tours Sofia had to offer for low-budget travellers it was too good a deal to refuse! We decided to go all out and spend three days following four different free tours: The Walking tour, The Biking tour, The Food tour, and the Hiking tour. As enjoyable and informative as they were, I have to say by the end I wasn’t paying much attention to anything the guide was saying. We were led like lost sheep through Sofia’s magnificent parks and fountains, ancient churches, and a few ominous monuments left over from the Communist era.

The Alexander Nevsky Cathedral was one of the most beautiful examples of Russian Orthodox Church architecture I have ever seen and was one of the main stops on our free walking tour. Built relatively recently in 1912, the cathedral was named after a Russian Prince and Saint and made to honour fallen soldiers of the Russo-Turkish war– a fight in which Bulgaria was liberated from Ottoman rule. Apparently after Russia donated the gold leaf that covers the church’s shiny, domed roof, a couple thieves were discovered on top of the cathedral trying to peel the gold off with strips of duct-tape. Nevertheless, the cathedral’s domes still glisten like fire in the sun and its Neo-Byzantium architecture is dazzling to behold.

The Church of St.George wasn’t quite as glorious as the Nevsky, but it was far more interesting. Hidden within a huge apartment complex beyond a guarded gateway, the Church of St. George is a remnant of a bygone era that we probably wouldn’t have found by ourselves. Built long ago by the Romans in the 3rd century, the building has been used as a pagan temple, a Christian church, and even as a mosque during the reign of the Ottoman Empire. The Church of St. George has a unique, round room building built entirely of red brick and, despite being one of the earliest Christian temples in the world, is still in good condition. Magnificent 12th century frescoes that had been painted over during the Ottomon period have recently been restored and can be viewed in all of its divine beauty today.

The Central Mineral Bathhouse was another gorgeous building with colourful, ceramic mosaics and Neo-Byzantine architecture. It was built in the early 20th century as a spa using the natural springs in the area but closed in 1986 due to the building’s poor condition, a structural issue that probably had something to do with the bombing of Sofia in World War II . The spa is still not functioning, nor is it open to the public, though restorations are currently underway. Nearby was a small assemblage of taps where locals can fill their water bottles with steaming, natural mineral water, overseen by a statue of Apollo Medicus, the patron-god of mineral springs.

The Monument to the Soviet Army is one of the many (in my mind) ugly structures left over from the Soviet Regime. As interesting as they are, these Russian monuments have nothing more to do with the Bulgarian people, but rather than demolishing them, the Sofians have a little fun with them. The Monument to the Soviet Army has been painted over at least five times, on one occasion with guy Fawkes masks and another in the colours of the Bulgarian flag. My personal favourite is the league of American superheroes and villains.

Here is another example of an ugly monument we stumbled upon. The city is collecting ideas from several artists on how to make it “more appealing”, but for now it’s being used as a hangout-skatepark.

At the end of the day, when looking back through my pictures, I noticed a spy in our midst- a heel and a sneak who seemed to dog our every step. When the walking tour finished and still nobody had given him any food, he howled with disdain and limped back into the shadows. Unfortunately a lot of these stray dogs wander the streets of eastern Europe and it’s hard not to feel sorry for them.

Dog on the move

Dog on a walk

Dog sleeping it off

Dog at your heels

Dog with his groove

Dog on the sidewalk

Dog in the distance

Dog creeping
The great thing about these tours is that you get to hear stories of people and places that you otherwise wouldn’t have known about, and find things that you may never have found on your own! Having enjoyed the free walking tour, we then proceeded on the biking, food, and hiking tour over our next few days in Sofia.

The biking tour led us through Sofia’s many lovely parks- to our surprise, Sofia was a wonderfully green city with many small gardens and fountains distributed carefully among the high rises and city streets. Our tour took us along twisting dirt trails through some of Sofia’s largest and most beautiful parks: Borisova Gradina, Loven and Yuzhen.

After a hefty bike ride we felt ready for a snack, and a food tour began to sound appealing. We met in front of a giant, stone head (kind of like the wizard of oz) and set off with a happy group of hungry folks. We visited several restaurants in the city and sampled typical, traditional Bulgarian tid bits. These fantastic foods included: Taratar soup, Palinkovac drink, Shopska Salad, Kyopolou, and Ljutenica.

The Grand Finale of tours was the hiking tour, a traipse up the nearby Vitosha mountain to visit Boyana lake, waterfall, and Boyana church. The hike was a lovely escape from the city smog and gave excellent views of the surrounding countryside, as well as an icy dip in the waterfall if you’re feeling adventurous (I wasn’t feeling it). If you’re interested in frescoes as old as the 11th century, Boyana church, part of the UNESCO world heritage list, is worth the admission fee. The paintings are beautiful and represent one of the most complete and well-preserved examples of medieval art in the Balkans, and though we were only allowed 15 minutes inside (no photos please) I was content to end my tour there. When it comes to Orthodox churches, I always enjoy trying to figure out who all the people with glowing heads are supposed to be.

Boyana Church
I honestly wasn’t expecting much out of Sofia, but the city surprised me with its laid back attitude, its gorgeous parks and fascinating sights! Our two day venture turned into four days of jam-packed tours, sight-seeing, exploring and eating! It was also great to meet up with familiar people down the road again and we hope that our paths will cross once more before we have to go home to Canada.