Ashleigh and I swung back and forth in unison as we wound up the snaking road to the top of Belogradchik, a small village resting on the side of a mountain. The town wasn’t too far from the train station but the taxi ride meandered wildly, taking near 180 degree turns every few minutes, and we struggled to keep our heads on straight as the g-force took its toll. Stepping out into the streets, we were met with a sense of peace and quiet in this sleepy village.

At the top of the hill, looming over everything, we beheld the mighty fortress of Kaleto— a once Roman, Byzantium, and finally Ottoman stronghold. These powerful empires, in turn, dominated the Bulgarian people, and the layers of their subsequent rule can be seen in the remnants of Kaleto Castle.

The strange and alien Belogradchik rock formations provided an ideal location for a fortress, a natural defence that the Romans quickly chose to occupy. With the ring of tall boulders at the peak of a hill, and the natural murder-holes and ledges to post archers, the only thing left to build was a single wall and gateway. I can only imagine how ecstatic the fort-location scout was when he found the place– he must’ve gotten a gold star for that one! Hundreds of years later, when the Ottoman Empire marched through, the Turks built a massive addition to the tiny Roman defences, the larger surrounding walls you see today.

Roman fort in the distance

Stairs up to old fort

At the peak of the old fort looking down inside

Completely surrounding Kaleto Fortress and beyond are the Belogradchik rocks, a geological phenomenon of standing stone pillars, surreal-looking but a natural occurrence. The rocks vary between red and yellow and some of them stand 200 metres high, leftovers from an ancient ocean that existed millions of years ago. 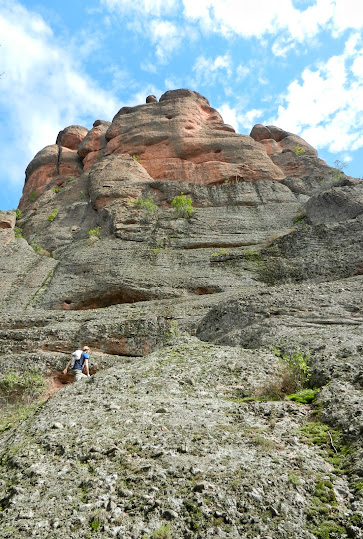 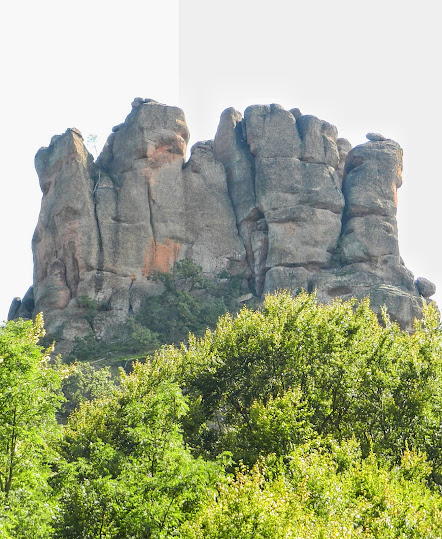 Many stories attempt to explain some of these peculiar shapes on the landscape– one of them involving a scandalous love between a nun named Valentina and the young shepherd Anton. After a child was born between them, the love between these two sinners could not remain a secret and Valentina, with her baby, was expelled from the priory. Unable to bear her shame, Valentina was prepared to end her life. As she exited the nunnery, the nun ran forward to leap from the cliffs. Anton on horseback, and the monks who passed her sentence, rode to stop Valentina, clutching her child, from plunging to their deaths, but all were interrupted by a sudden storm, earthquakes that split the ground, and blackness. When it was all finished, Anton, Valentina with her child, and even the monks were frozen in stone. Their petrified figures are said to still be there today among the Belogradchik rocks, so try to guess which one is which!

There are many hiking trails going from the town through the maze of Belogradchik’s rocks, and as we walked we marvelled at their many twisting forms, jutting like turrets above the tree-line. I felt like we had landed on an alien world! By chance, we happened to find a trail to Lepenica Cave that led us through strange valleys, along eerie precipices and down a steep cliff. At last we found Lepenica: a double-decker cave with wide open mouths yawning out of the mountainside. I am sure it once provided a reliable home for an entire, cave-man tribe. 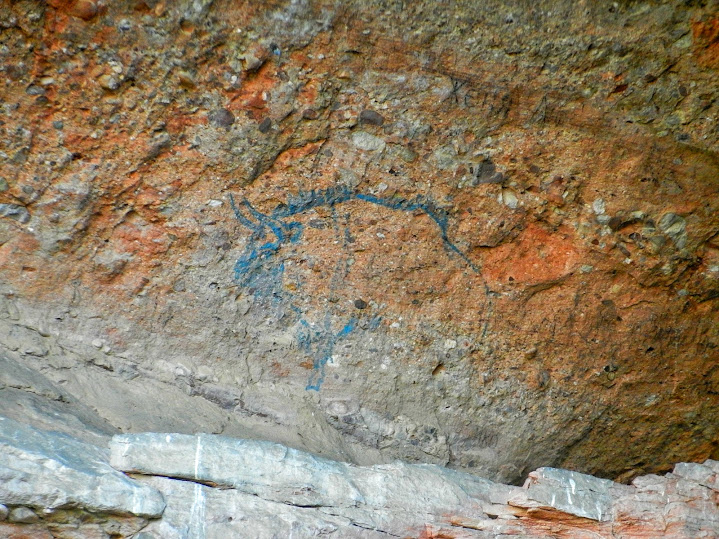 Tucked far away in the north-western corner of Bulgaria, Belogradchik is an easy place to bypass, but if one takes the time to get off the beaten trail to visit this sleepy village, it can offer one of the most unique and best-preserved strongholds in Bulgaria along with a one-of-a-kind Natural Landmark. Tourism hasn’t exactly reached its peak in Bulgaria even though it has its share of wonders, so if you have an adventurous spirit and if you hurry, you could be one of the first people to stumble upon incredible lands like these.

2 thoughts on “The Mountain Fortress of Belogradchik”