We arrived by bus into the lovely city of Stoke-on-Trent in late January, eager to move on from the bustling streets of London. Phil and Carole welcomed us into their home with open arms, and eager to show us their beautiful garden that was in need of some cleaning up. The Sensory Garden, as they’ve named it, has been designed to be a fully wheelchair accessible oasis of peace and tranquillity, filled with fragrant flowers, fruit, healing herbs, and plenty of places to sit and enjoy your surroundings. 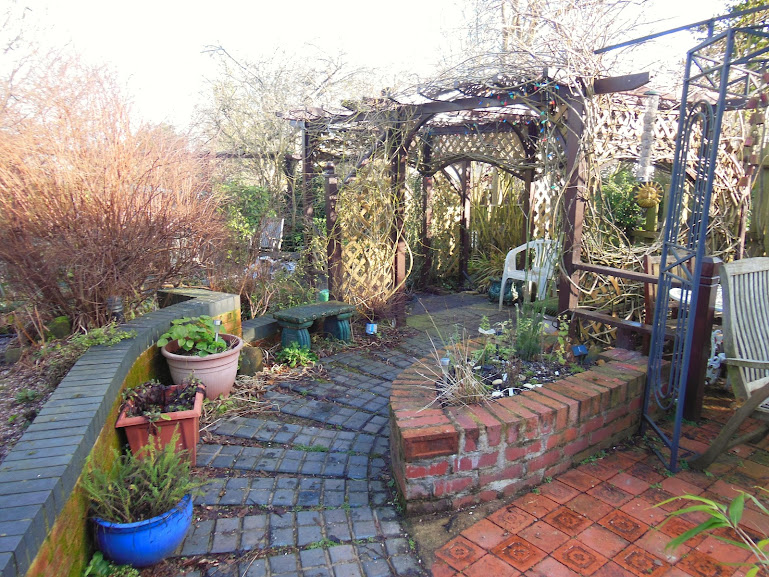 They had been off living the dream for the past two years, travelling in a caravan, so the garden was in need of a bit of cleaning up. Chopping wood, power-washing the pathways, getting pots ready for planting, and tidying up the greenhouse for the most part. Phil was also involved with a local community project, Friends of Hartshill Park. Hartshill Park is a large nature reserve just down the street from their home which has been undergoing a transformation over the last few years thanks to the help of volunteers and local grants. My favourite spot was a nice little lake at the foot of what was once the gardens of a Catholic covenant, carefully tended by the nuns living there.

Phil took us out on the town a couple of times to some great local spots. I had been looking forward to finding a pub in England and soaking in the relaxed tradition of the quirky names (The Boat and Horses, The Glebe, The Wheatsheaf), the open camaraderie, and, of course, the beer! We spent a night pub-hopping, stumbling first into the classy Victoria and ending at cosy The Marquis of Granby. At the Marquis there was an Elvis impersonator performing and someone having a birthday was treating everyone in the pub to sandwiches! I really enjoyed the Cheshire View though, which we went to after seeing the ruins of Mow Cop Castle.

The Cheshire View.
One night Phil took us walking along the marina and we marvelled at the beautiful houseboats along the canals. Back home, “house boat” is more or less synonymous with great-big-fat-boat, but these boats were lovely. Long and sleek, they were perfect for gliding along the narrow channels. One woman, who probably saw us gawking at her floating home, was kind enough to invite us to have a look at the interior. It was a wanderers dream! A small wood-stove in the corner, a nice little kitchen, and a bedroom that was much bigger than expected.

Nathanael and I were really interested in castles, ruins, and other remnants of England’s history. We spent a day in Tamworth Castle, a small castle set up above some beautiful gardens. I thought the courtyard looked spooky from the balconies, though I couldn’t put my finger on why. Regardless, I loved how small the keep was and how comfortable it felt. The view from the roof was worth the climb too!

Feeling adventurous, we decided to spend a night camping along Hadrian’s Wall. Built by the Romans, the wall spans 73 miles long from Newcastle-upon-Tyne to Carlisle. The weather was terrible! We underestimated how long of a trek it was from the train station to the wall, so we were exhausted by the time we made it. The wind howled and the rain beat at our tent all night-long. But having walked all that way, we had to at least have a good look at the wall. We slept at the Cawfields, and just nearby was the remains of a milecastle. We started here and hiked a couple of kilometres, seeing the foundations of towers and the old wall now half its original height. Suddenly a gale swept up. We tried to wait it out, but eventually decided that we felt happy with what we had seen, and so we trudged back to our campsite, through the rain, to pack up and leave.

Our last stop in England (for now) was going to be Newcastle-upon-Tyne before we were moving on to Edinburgh, Scotland. We took the train from Haltwhistle and headed east. We found the most luxurious hostel I’ve ever seen, though I’m sure the fact that we had been chilled in a tent the night before made it seem all the better. We had just one night, but lucky for us the weather was perfect for some late night sight-seeing. The city looked a bit like a fairytale, all lit up with the bells of St Nicholas’s Cathedral ringing for ages in the background. Walking along the High Level Bridge we could see the layers of the city. Stairways were shrouded in ivy, hiding herringbone patterned walls and pieces of old fortifications. Castle Garth’s Keep is perched regally overlooking the Tyne. We would have loved more time, but I think it was made all the more magical by time being short.