A few people have been asking me about what kinds of Scandinavian food we’ve been having so far, so I wanted to take a second to tell you all a bit about what we’ve been eating!

First up, Norwegian fish cakes or fiskeboller. Mostly made from spices, flour, and fish puréed in a blender, they look like pancakes but with a dense consistency, and are very tasty! Siv (Nathanael’s cousin) made them for us one night and they were delicious. We had them with Norwegian potato dumplings served with a sweet sauce.

Next, we’ll move on to some of the more “interesting” cheeses we’ve had. First is pultost, a very strange, granular cheese flavoured with caraway seeds. Terje suggested we give it a try, and actually it’s not that bad. That being said, it wouldn’t exactly be my first choice to put on my morning toast. This one isn’t that popular in Norway anymore apparently, and it is still pretty exclusive to Norway.

The second strange cheese we tried was brunost, or simply “Brown cheese,” as everyone introduced it. This one was funny, it was served at almost every meal by everyone we stayed with, and they always brought it to the table while eagerly asking, “Have you tried brown cheese yet?” It’s made by boiling the milk mixture for several hours, eventually turning the milk sugar to caramel and giving the cheese the distinctive brown colour. It was actually quite good on bread, though I didn’t like it as much by itself.

Brunost, or brown cheese.
Now for a move over to the more intoxicated side, aquavit! It was spicy and very smooth, reminding me a bit of vodka and Jägermeister (due to the caraway seeds being the prevalent spice). This isn’t exclusively a Norwegian liquor, but since we tried it in Norway I’m going to include it here. We tried Linie Aquavit, which is a Norwegian brand. The aquavit is matured in sherry casks which are taken and sailed over the equator twice, under the premise that the movement of the waves, saltiness of the air, etc. ages and flavours the aquavit. On the bottle it tells you the route the sherry cask took and how long the journey was.

There seem to be a baffling number of dairy products available in milk cartons. Not only can you get the standard variations of milk (skim, whole, etc.), but you can also get buttermilk, yogurt in all flavours, skyr (a kind of yogurt), and who knows what else. Even now I still usually ask someone before pouring myself a glass. Paranoid you say? Well, one day about two weeks into our stay at Makvarket no one was around to ask and I poured myself a glass of butter milk. And had to drink it. Yeah.

They also have these goofy looking hotdogs here called Fransk hotdogs (French hotdogs). Take a hollow roll, fill it full of assorted condiments (the ones offered to me: ketchup, mustard, mayonnaise, and french dressing), and slide a long sausage in. They’re actually great, until you get to the bottom. Since the bun isn’t sliced everything stays in nicely, but once you get to the bottom you discover that you still have maybe 2 inches of bread that is now full of the remaining condiments sans sausage. You also can’t put any of the chunky toppings in. Still, overall they’re tasty and hilarious.

Fransk Hotdog.
Beer! Copenhagen is home to the Carlsberg headquarters, and even today a working brewery across the street from the Carlsberg Laboratory, where research is actually related to brewing! We took a tour of the brewery and tried the Original Dark Lager, which is based on a recipe dating back to 1854. It was delicious! And those who know me and how about beer know that that’s saying a lot.

I love saffron buns!! Also called lussekatter, I first discovered these somewhat by accident in a 7-eleven. We were grabbing some coffee and I asked the girl at the register if she could recommend a pastry to try. She pointed out the saffron buns as a favourite of hers since they reminded her of Christmas. Bright yellow on the inside with a delightful flavour that goes perfectly with a hot cup of coffee 🙂

We tried knäckebröd, or something similar, in Norway as well, but in Sweden it was a daily staple for us. It took a bit of getting used to (I thought it tasted like cardboard at first), but with cheese and lingonberry jam, yum! Pretty soon we were breaking off piece after piece at every coffee break. I also loved the Dala horse on the package of the brand we usually had (I even saved the wrapper from one package).

Knäckebröd!
We tried Biff à la Lindström, Swedish beef and beetroot burgers, in a Swedish-speaking part of Finland. Amazing! I’m a big fan of beef in non-burger forms and of veggie-burgers, so this was the perfect combination for me. They’re a blend of beef (or maybe elk), beetroot, and spices. You do a double-take when you first look at them, because the beet gives them a red colour that makes you wonder for a second if they’re still raw, but they are delicious. Best burger (beef, veggie, or otherwise) I’ve tasted, hands down.

Karelian pies are a tasty meal we had several times in Finland, including as part of Christmas dinner. They’re a traditional Finnish pie from the Karelia region of Finland, an area bordering Russia. Traditionally, they were made with a rye dough crust and filled with barley or other grain mixtures. Today, you can buy them in bulk from the grocery store with a rice filling. You have to eat them hot (they’re not that great cold), and usually you will spread butter or munavoi, egg butter. Egg butter is boiled eggs that have been mashed and mixed with some butter, soooo good.

Pie with egg butter on the side.
This next one is going to sound a bit over-the-top, decadent, but hear me out! My favourite cheese we’ve encountered so far, has been Leipäjuusto (“bread cheese,” or, “squeaky cheese,”) from northern Finland. Milk is curdled and set into a round disk a couple of centimetres thick. Then the cheese is baked, grilled, or flambéed to give it these char marks on the outside. What is so decadent about this cheese then? You fry it up when you want to eat it! That’s right, you cut off a big piece, fry it until it’s warm and soft, then eat it by itself or with some jam. Yuuuuum! The cheese is really light-tasting, so it doesn’t feel heavy when you’re eating a big piece of it, and it’s so good.

Wild foods are really popular, especially since they’re so abundant in the vast wilderness that Finland boasts. Berries of all different kinds (lingonberries, blueberries, cloudberries, etc.), mushrooms, herbs, and also a variety of wild game. One we were excited to try was elk. Whether fried, grilled, ground into sausage, stuffed in pies, or thrown in soup, elk is delicious. We were lucky enough to try some that had been hunted right in the local area. It doesn’t get better than that! (This picture is actually from Estonia, but it’s still elk soup!) 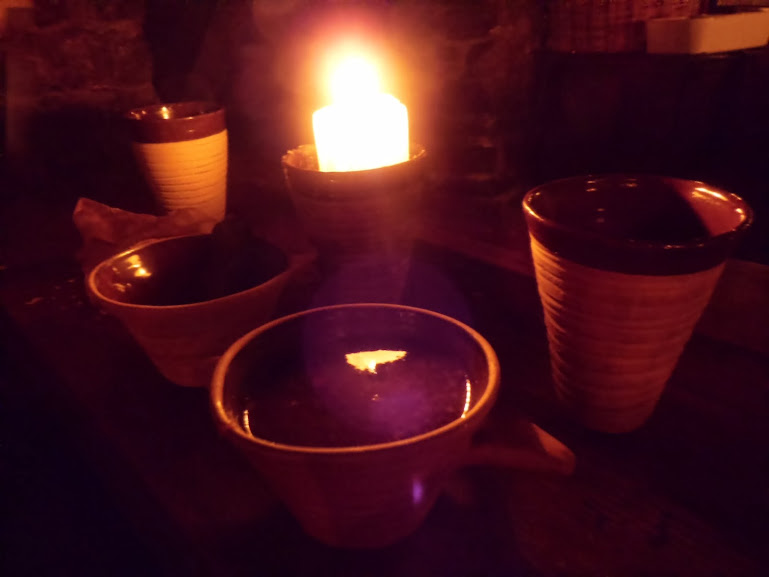 A friend of Nathanael’s introduced me to a great Finnish brand of mixed drinks. Not too sweet (unlike North American brands of coolers), and loads of flavour. Long Drink is the blanket term for this kind of mixed drink, and the company Hartwall manufactures hugely popular lines like Original Long Drink and Original Cool Grape. The Original Cool Grape in cranberry was definitely my favourite, but the original is also really good if you’re looking to relax with a cold one.

We tried glögg for the first time in Gothenburg, Sweden, but we had much better glögi at Christmas in Finland. Called “mulled wine” elsewhere, it is wine with spices (cloves, cinnamon, and others) and sometimes fruit slices that is served hot. We tried the Blossa brand in Sweden, and it was far too sweet for our taste. At Christmas dinner, however, we tried some that our hosts had made, complete with red currants, and it was AMAZING. Just the right combination of a bit of sweet with a dash of Christmas spices.

Obviously there are so many other foods and drinks we could talk about, but you’ll have to discover them for yourself! Don’t be afraid to grab that strange-looking pastry in the bakery window, or to order that dish on the menu that you can’t even pronounce. You never know what you’ll discover if you aren’t afraid to risk a few dollars and a potential stomach ache!

5 thoughts on “Scandinavian Food, a Smörgåsbord!”